For Rightsize, it Pays to Give Back 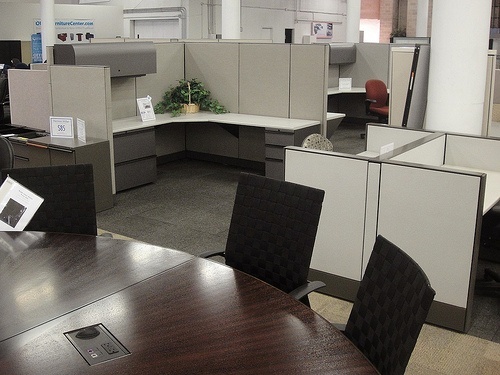 The value of making charitable contributions

The Rightsize employees and executive team members understand that a business is only as strong as the community around them. Which is exactly why, for Rightsize, supporting local organizations is part of their culture. In the last year, Rightsize contributed to dozens of non-profits, including the Marine Toys for Tots Foundation of Chicago, Chicago Public Schools, the National Association of Professional Women, the American Cancer Society, and more.

But for a few other non-profit groups, like The Brain Surgeons Theater, NCTV17 and Zelous Good,  Rightsize made a serious impression in the field they know best: furniture.

The Brain Surgeon Theater is a non-profit organization that makes the theatrical arts available and accessible to students throughout Chicagoland. When they needed the use of furniture to keep their program successful, Rightsize came to the rescue.

“Jason at Rightsize Facility was incredibly generous and helpful,” says Gwen Tulin, founding Brain Surgeon Member and Artistic Director. “He facilitated the donation of many different sets of chairs, whiteboards, and storage lockers that are now being used as furniture for our theater seating, summer camp classrooms, and camper cubbies. Not only did he schedule the time for donation, he was on-site while we picked up the furniture and helped us decide what would be the best furniture for our theater.”

When Naperville television network NCTV17 was counting on receiving furniture from their parent organization who's space was being decommissioned by Rightsize, the network executives were concerned that maybe the donation agreement woudln't be upheld — but that’s not the way Rightsize does business.

“I reached out to Rightsize and explained our situation, and Mason was very generous and kind and said they would continue to honor that,” says Jane Wernette, Community Development Director of NCTV17.

Rightsize provided the TV station with a work surface, chairs and more. “It allowed us to reconfigure our space that we would not be able to do otherwise,” says Wernette. “We could optimize the space we had and improve the quality of the furniture we had at the studio.”

According to Wernette, the best part of working with Rightsize was that they treated NCTV17 as full fledged customers, striving to build a relationship with the organization.

“Rightsize has not only been extremely generous, but they were very helpful throughout the process.”

When Rightsize found themselves with extra furniture, they reached out to non-profit organization Zealous Good to see how they could help make a difference for other nearby charities. “At it’s core Zealous Good makes it easy for people to donate their extra goods to non profits with matching needs,” says Zealous Good founder and CEO Brittany Martin Graunke.

So, Rightsize created a list of the items they had available, and then Zealous Good put out the feelers for organizations in need. From there, a match was made. “Several non profits requested their donations,” says Graunke. Which means, that for anyone thinking about donating excess furniture, there are plenty of worthy candidates. If your organization is interested in making a difference, Zealous Good is a great place to start.