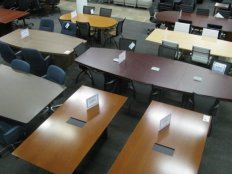 This week Rightsize Facility Performance announced the acquisition of the assets of Modern Office Interiors, Inc., an independently operated office furniture dealership based on Naperville — and the most valuable asset of all is MOI's Jim Peters, who will join Rightsize as vice president, suburban team lead.

Rightsize operates a 200,000-square-foot showroom at 5000 W. Roosevelt Rd. in Chicago, a design studio and sales office in River North, and provides workstations, desks, seating, file cabinets, conference and reception furniture, as well as continuing to take on decommissions, furniture buybacks and deliveries. It decommissioned about 3-million-square-feet last year.

As reported in GlobeSt.com, Awtry, who started the firm in 2004, has been growing the firm and also has ambitions to significantly expand its regional footprint. The company now employs more than 80 people.

Peters, former president of MOI, has 25 years in the business. He will manage the firm’s suburban team of account managers and designers as well as overseeing the firm’s expansion plans in the suburban Chicago market.

“I have admired Rightsize for many years. Its ability to continually deliver seamless workplace transitions and end-to-end design/furnish solutions is unparalleled. I’m excited to join such a terrific team,” said Peters.

Peters is a graduate of Eastern Illinois University. He currently serves as chairman of Buy Local Naperville, a 501(c)(3) grassroots program formed by Naperville business owners to strengthen and support locally owned and independent businesses.