The Cube Makes a Comeback 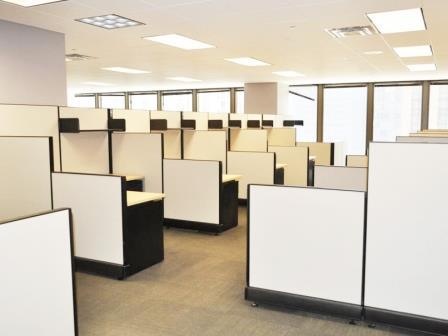 Workplace introverts, it’s time to celebrate: The cubicle is back.

Plenty of companies still embrace the open-workspace concept, creating entire floors with not a single cubicle wall to be found. But many others are finding that their workers want more privacy than open-air floor plans provide. Because of this, many companies are moving back to the traditional cubicle formula.

Mason Awtry knows this. And he should; He’s president of Chicago’s Rightsize Facility Performance, a national office interiors and facility services firm that provides furniture to clients moving to new offices.

This means that he stays on top of new trends in office layouts. And during the last three to four months, he’s seen a steady stream of companies moving back to individualized workspaces. As he sums it up, the cubicle is “back in fashion.”

This means that many companies are moving away from what Awtry calls the open-air system of office layout. In this layout, most cubicle walls are removed, and employees work in open areas, in full view of everyone else.

This layout is supposed to inspire creativity and collaboration. It works for many companies and employees. But it’s not the right layout for every office or office worker.

Those companies that are moving back to cubicles, though, aren’t always returning to the cubicle of old, the one surrounded by 8-by-8 10-foot panels. Today’s modern cubicle walls usually stand up to 54 inches tall. And modern cubicles usually feature some sort of glass element.

These cubicles provide privacy, then, but also prevent employees from walling themselves completely off from their co-workers. Consider the modern cubicle a happy medium between the world of wall-less workspaces and the cubicle mazes so often derided by workplace critics.

How strong is the demand today for the semi-traditional cubicle? Awtry says that Rightsize sold 800 cubicles in Chicago last month alone. And these cubicles are going to a wide range of companies. Awtry said that he sold about 100 to a law firm, 40 to a technology/data-storage firm in the suburbs and 76 to an insurance firm.

Those companies that are adding cubicles to open-air floor plans are doing so for one main reason, Awtry said: They want their employees to be more productive.

Awtry points to an entertainment company in downtown Chicago. Such a company — filled with creative types — would seem to be ideal for the open office concept. But the company instead has requested a shipment of cubicles from Rightsize.

“Their specific comment was that they needed more privacy,” Awtry said. “Their employees needed to be less distracted.”

It’s true that the cubicle has long been derided by office workers. But here’s the truth: Many of these same office workers missed their cubicles once they were taken away. Many found, too, that they work more efficiently when they have at least a small space to call their own.

“Although the concept of the open office, Google-like space is one that people find aesthetically attractive, it does not necessarily hit the functionality requirements for every company,” Awtry said.

So if you do miss your former cubicle? Don’t despair. It might be coming back.

As seen in the RE Journal Blog. Read more on their site here.